The Case for Anger Management (Genesis 4) from Stephen Sizer on Vimeo.

Before the age of television, I remember as a child playing Cleudo with my grandparents. Cleudo is a detective game of deduction devised by Anthony E. Pratt, a solicitor’s clerk from Birmingham in 1949 and originally published by Waddingtons of Leeds.

The aim is find out which of six characters, Miss Scarlett, Colonel Mustard, Mrs White, Reverend Green, Mrs Peacock and Professor Plum, committed a murder, why they did it, where they did it and how – which of the implements they used to do it. “Was it really Colonel Mustard in the Billiard Room using the candlestick?”

All very engrossing for a five year old. And no, it didn’t give me nightmares. At 25 I moved on to the Miss Marple and Poirot stories by Agatha Christie. Now its wall to wall CSI programmes. There was something really quite captivating about trying to figure out “who done it” before the end of the episode. 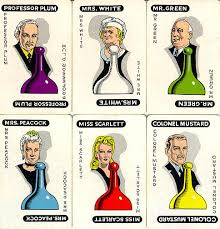 Today we are considering Genesis 4:1-6:4 and where rebellion leads. It leads to Murder #1, the first murder in history, when Cain kills his brother Abel. This is not a murder mystery, however. Moses tells us right away that Cain is the killer, and even if he had not, there really were not exactly many other suspects around.

Although it may lack suspense, the story of Cain and Abel is important because it contains significant lessons for us. As we look at this tale of two brothers, let’s ask the Lord to help us learn from the tragic account of Cain and Abel.

1. Resentment leads to Rebellion and Death

Our story begins as Abel and Cain bring their sacrifices to the Lord. The first two verses of Genesis 4 give us some back-ground.

We learn that Adam and Eve have a baby, a little boy named Cain. Eve is excited. Though, because of disobedience to God, childbirth had become painful, God in His grace allows Adam and Eve to be fruitful and replenish the earth. Then a second son, Abel, is born. He has an interesting name. In Hebrew Abel means breath or temporary which foreshadows that Abel’s life will be cut short. The two boys grow up and choose different careers. Abel becomes a shepherd with flocks, while Cain becomes a farmer with crops.

“In the course of time Cain brought some of the fruits of the soil as an offering to the LORD. But Abel brought fat portions from some of the firstborn of his flock.” (Genesis 4:3-4a)

Why did God like Abel’s sacrifice? Why did He reject Cain’s? I used to feel sorry for Cain. He brings an offering to God only to be told it is not good enough. Talk about getting your bubble burst. Over the years, different Bible scholars have speculated as to why God rejected Cain’s offering. The Scofield Reference Bible says God expected a blood sacrifice, which was a sin offering, signifying atonement of sin.

Others speculate that God must have told Cain that a grain offering was not acceptable, but that Cain ignored what the Lord said. Yet, when we go to the rest of the Pentateuch, the first five books of Moses, we find that grain offerings are very appropriate. As a farmer, it seems Cain should have brought the first fruit of his crop as an offering to the Lord. So what was the problem?

The Book of Hebrews tells us: “By faith Abel offered God a better sacrifice than Cain did. By faith he was commended as a righteous man, when God spoke well of his offerings.” (Hebrews 11:4)

It seems the difference between Cain and Abel was not so much the kind of offering they brought, but rather the attitude or motive behind their offering. Cain’s problem was a bad attitude. I’m not sure what his motives were, but they were obviously not focused on worshiping the Lord.

That is our first lesson from our text. Motives matter to God. God is not impressed with those who do the right thing for the wrong reason. This truth is taught throughout the Bible. On one occasion, Jesus looked at the Pharisees and quoted Isaiah,

“These people honour Me with their lips, but their hearts are far from Me.” (Matthew 15:8)

Sometimes people can do good things but with wrong motives. A man was once riding in a London taxi. He noticed the cab driver slowed down to avoid hitting a pedestrian. Complementing the driver’s, he said, “I noticed you slowed down for that fellow.” The driver responded, “Yeah, if you hit them, you have got to fill out a report.”

The lesson from Cain and Abel is that God cares about our motives. When God rejects his offering, Cain becomes very upset. “So Cain was very angry, and his face was downcast.” (Genesis 4:5b). In Verses 6 and 7, God tells Cain that he has a choice. He can do what is right, or he can continue to rebel. Cain makes his decision in 4:8.

Murder #1, in the first degree. From the murder of Abel we learn that anger and jealousy can be very destructive. When God accepts Abel’s offering and rejects Cain’s, Cain directs his anger, jealousy, and hatred toward his brother. The history of crime shows that when given the opportunity, hatred often leads to murder. That is what Jesus was pointing to in Matthew 5:22 where He says hating your brother is really the same as murder.

For Cain, there was no police or social structure to restrain his destructive emotions or prevent his hatred from turning into murder. Let me ask you, how do we deal with anger? My guess is there is no one here who has murdered someone like Cain did. Nevertheless uncontrolled anger can be very destructive.

I think of the man who wrote this letter to his insurance company, “Whenever I get angry, I close my eyes and count to ten. I was driving on the motorway when I remembered how mad I was at my sister. I closed my eyes to count to ten and the next thing I knew there was this terrible crash.” Anger can also harm one’s health. Angry people die younger than those who are able to deal with their frustrations. Anger destroys relationships.

I’ve known people who claim to be Christians who don’t ever speak to each other because of anger that has festered for years. “As long as anger lives, she continues to be a fruitful mother of many unhappy children.” Friends, some of you may have come here today feeling angry. It might have been something which happened this morning. It might be something someone said to you decades ago. Whatever caused your anger, you need to get control of it, and get rid of it. Ephesians 4:26-27 says if we don’t control our anger, we give the devil a foothold in our lives.

That is what Cain did. That is what God warned him about in 4:7 “….if you do not do what is right, sin is crouching at your door; it desires to have you, but you must master it.” Uncontrolled anger and jealousy resulted in Abel’s death and destroyed Cain’s life too. Don’t let it happen in your life. Acknowledge that the attitude is wrong, confess it to the Lord, and ask His help in overcoming this destructive attitude. We have seen how resentment leads to rebellion and death.

Cain’s sin not only led to murder, it devastated his own life too. After he kills his brother, the crime is quickly discovered.

“Then the LORD said to Cain, “Where is your brother Abel?” “I don’t know,” he replied. “Am I my brother’s keeper?” The LORD said, “What have you done? Listen! Your brother’s blood cries out to me from the ground. Now you are under a curse and driven from the ground, which opened its mouth to receive your brother’s blood from your hand. When you work the ground, it will no longer yield its crops for you. You will be a restless wanderer on the earth.” (Genesis 4:9-12)

Cain’s response to this punishment has been the subject of some discussion. Cain said to the Lord, “My punishment is more than I can bear.” (Genesis 4:13). Some believe Cain repented, while others see it as simply an expression of despair. Whatever the case, God chooses to show mercy to Cain. He promises to protect him and not allow anyone to kill Cain. There has been some speculation about this mark. Whatever it was, Cain is given a distinguishing physical mark so that he will not be harmed.

Then Cain, a man who is guilty of first degree murder, is allowed to go to the land of Nod and build a city where he and his family dwell. As we look for application, we must keep two very important truths in view. The first is the one we have just talked about with Cain. Sin has serious consequences. The second that God offers forgiveness to all sinners. No matter who you are, no matter what you have done, if you turn to Jesus Christ, you will find free and full forgiveness.

“The wages of sin is death but the free gift of God is eternal life in Christ Jesus our Lord.” (Romans 6:23). Sin leads to death. Repentance leads to life.

In contrast to the sad story of Cain, in Abel we see glimmers of hope. God spoke well of Abel’s offerings, which reflected his godly heart attitude. That is why the writer to Hebrews can insist:

We are told that Adam and Eve have another son, whom they name Seth (Genesis 4:25). And we see further hope when Seth has a son he names Enosh. And the Scriptures says, “At that time people began to call upon the name of the Lord.” (Genesis 4:26)

Finally, we see hope in the story of Enoch in chapter 5. “Enoch walked with God; then he was no more, because God took him away.” (Genesis 5:24). We all leave a legacy when we die.

The question is: What kind of legacy is it going to be? Will it be an ungodly legacy, as Cain did, or a godly legacy, as Abel and Seth did? Will future generations remember you as one who lived by faith in God? In the story of Cain and Abel we see in embryonic form how the wages of sin is death, but the gift of God [in Christ Jesus] is eternal life. (Romans 6:23). Resentment leads to rebellion and death but repentance leads to forgiveness and new life.

Adapted with grateful thanks to Dan Erikson from his sermon “A Tale of Two Brothers” posted by those lovely people at SermonCentral.com

Delivered to the CBSI groups in Virginia Water and Ascot, October 2010.