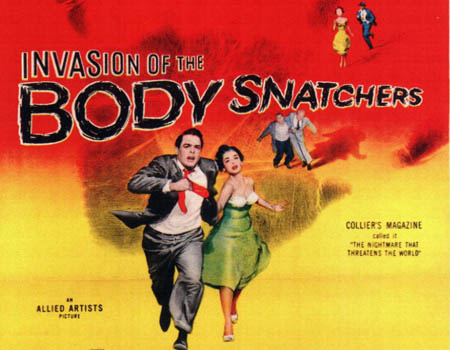 What scared you the most growing up as a child? When I was a child, the highlight of the week was watching TV at weekends – there was wrestling on a Saturday afternoon and a movie on Sunday afternoons- usually a black and white film about World War 2 or a Western. One of the scariest films I ever remember watching still haunts me. It was called Invasion of the Body Snatchers. Made in 1956, Don Seigel adapted the screenplay from Jack Finney’s 1954 novel The Body Snatchers. The story depicts an extraterrestrial invasion of a small town in California. The invaders replace human beings with clones that appear identical to real people but are actually devoid of any emotion or individuality. A local doctor uncovers what is happening and tries to stop them. The Invasion of the Body Snatchers spawned a whole genre of science fiction thrillers on the same theme. The most recent adaptation, called the Invasion, made in 2007, stars Daniel Craig and Nicole Kidman.

Some have speculated that Jack Finney had the very real fear of Communist infiltration in mind when he wrote his book about zombies.  He could just as easily though have been writing about the infiltration of the Church.

Because James 2 warns that there may indeed be spiritual zombies sitting right next to… They may come to Sunday services, sing the hymns, read the Bible, affirm the creed, recite the Lord’s Prayer, and drink the coffee. But are they really human or aliens? How can you be sure?

In James 2 we are told how to tell the difference. We are going to learn how to distinguish between three very kinds of faith – dead faith, demonic faith and dynamic faith. You know that faith is central to the Christian faith. The Bible says we are saved by faith (Ephesians 2:8-9); we must walk by faith (2 Corinthians 5:7); because we can only please God by faith (Hebrews 11:6); knowing whatever we do is sin apart from faith (Romans 14:23). So faith, what ever it is, is central to being a Christian. But there are three different kinds of faith – dead, demonic and dynamic faith, and its important we know the difference between them.

“What good is it, my brothers and sisters, if someone claims to have faith but has no deeds? Can such faith save them? Suppose a brother or a sister is without clothes and daily food. If one of you says to them, “Go in peace; keep warm and well fed,” but does nothing about their physical needs, what good is it? In the same way, faith by itself, if it is not accompanied by action, is dead. But someone will say, “You have faith; I have deeds.” Show me your faith without deeds, and I will show you my faith by my deeds.” (James 2:14-18)

James opens this discussion with two rhetorical questions in verse 14, then asks “Can such faith save them?” The obvious answer is “no”. In the Greek there is an article before the word faith.  James is confronting a kind of faith that does lead to salvation.

On the surface it may look as if James is comparing faith and works. But in reality he is distinguishing dead faith from saving faith.  People with dead faith substitute words for deeds. They use the correct vocabulary for prayer and testimony, and can even quote from the Bible; but their walk does not match their talk. Food and clothing are basic needs of everyone whether they are believers or not. We are all created in the image of God and therefore we have an obligation to care for others in need. If we are grateful to God for all he has provided for us, if we recognize he has entrusted his assets to us, then we will gladly share them generously with those in need. Galatians 6 says

“Therefore, as we have opportunity, let us do good to all people, especially to those who belong to the family of believers.” (Galatians 6:10)

The philosopher, Soren Kierkegaard, tells the story of a make-believe country in which only ducks live. “One Sunday morning all the ducks came into the church, waddled down the aisle and into their pews, and squatted. Then the duck minister took his place behind the pulpit, opened the duck Bible and read, ’Ducks! You have wings, and with wings you can fly like eagles. You can soar into the sky! Use your wings!’ All the ducks yelled ’Amen!’ and they all waddled home.” To show compassion toward a person in need is an expression of love, and faith works by love. John Calvin wrote, “It is faith alone that justifies, but faith that justifies can never be alone.” Faith without works is dead faith.

“You believe that there is one God. Good! Even the demons believe that—and shudder. You foolish person, do you want evidence that faith without deeds is useless.” (James 2:19-20)

Whenever they encountered Jesus, they acknowledged his sonship (Mark 3:11-12). They believe in judgment (Luke 8:31) and they recognize that Jesus will be their judge (Mark 5:1-13). They always obeyed and submitted to Him which is more than can be said of many of us. But theirs was demonic not saving faith. Believing and trembling (or having an emotional or ecstatic experience) like the demons is therefore not sufficient. A person can believe intellectually, and be stirred in their heart and still be lost. True faith involves something more, something that can be seen and recognized – a changed life. In Ephesians 2, God says:

“For it is by grace you have been saved through faith, and this not from yourselves, it is the gift of God, not by works. For we are God’s handiwork, created in Christ Jesus to do good works, which God prepared in advance for us to do.” (Ephesians 2:8-10)

So good works are evidence of God’s saving work in us and through us. Without them, people can rightly deduce that we are merely displaying dead faith or demonic faith. There is only one kind of faith that saves and that is:

Saving faith is dynamic because it leads to action. James illustrates dynamic faith through two people.

3.1 The Example of Abraham

“Was not our father Abraham considered righteous for what he did when he offered his son Isaac on the altar? You see that his faith and his actions were working together, and his faith was made complete by what he did. And the scripture was fulfilled that says, “Abraham believed God, and it was credited to him as righteousness,”and he was called God’s friend. You see that a person is considered righteous by what they do and not by faith alone.” (James 2:21-24)

The word “considered” is a legal or financial term – it means “to put to one’s account”. As a sinner, Abraham’s spiritual bank account was empty. He was bankrupt. But he trusted in God, and God put righteousness into Abraham’s account.

He trusted in God and he was declared righteous. The word “believe” comes from two words, “be” and “live”. After we begin our new life in Christ, like Abraham, we show that we are alive by living like Jesus. People should be able to read the Gospels and then look at you and say – he or she is following Jesus! The Apostle Paul said, “Follow me as I follow Christ.” (1 Corinthians 11:1 paraphrased). The example of Abraham.

3.2 The Example of Rahab

“In the same way, was not even Rahab the prostitute considered righteous for what she did when she gave lodging to the spies and sent them off in a different direction? As the body without the spirit is dead, so faith without deeds is dead.” (James 2:25-26)

Rahab risked her life to rescue the Hebrew spies. She further risked her life to share the good news with her family in order to save them too. She had very little information to go on but she was convinced they were sent by God and she acted to do his will.

James is saying that like breathing, you can’t have one without the other. We are not saved by good works, but saved to show good works. D.L. Moody once said, “Every Bible should be bound in shoe leather.” He didn’t say that just because he had been a successful shoe salesman but because he walked his talk as a follower of Jesus Christ.

“Religion that God our Father accepts as pure and faultless is this: to look after orphans and widows in their distress and to keep oneself from being polluted by the world.” (James 1:27).

God is longing for you to trust him. Not simply saying you trust him but demonstrating your trust in him in a dynamic faith. In the way you care for the vulnerable. In the way you live like Jesus. Someone once said faith is not believing in spite of the evidence, but obeying in spite of the consequences. Let me ask you, what are the consequences of reading this passage for you? What has God told you specifically to do this morning? Then please do it this afternoon. If you really want to experience God in a new and powerful way, then do what he says, whatever the consequences! Don’t settle for a dead faith, or a demonic faith, but show that you do indeed have a dynamic faith. Trust him day by day then you too can be called along with Abraham, a “Friend of God.”