The Mayor of Bethlehem Slams Illegal Jewish Settlements from Stephen Sizer on Vimeo.

Mayor of Bethlehem on the Impact of the Israeli Occupation of Palestine from Stephen Sizer on Vimeo.

Tonight I had supper with Victor Batarseh, the Mayor of Bethlehem along with a few friends of Bethlehem Bible College. Victor is a gentle grandfather figure, a retired physician and active Christian. He also happens to be a US citizen, although the US Consulate General in Jerusalem refuses to meet with him. The British Consulate general is also unwilling to meet him. “They will meet with the Mayors of other Palestinian towns but not with the Christian Mayor of Bethlehem.” It is also almost impossible for him to leave Bethlehem without special permission from the Israeli authorities. I asked him why. He said “Because I am calling for justice for the Palestinians and peace with Israel and that is not the non-violent message Israel wants to hear from the Occupied Territories.” 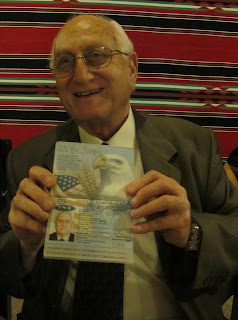 He derided the idea that for the last ten months Israel has abided by a moratorium on Settlement expansion. “The settlement expansion has been continuing” he insisted. “The municipal boundary of Bethlehem used to encompass 35 square kilometers of territory. Now it is only six.” he insisted. The rest, mostly the agricultural land has been stolen by the 18 illegal Jewish settlements that now encircle Bethlehem.

He was elected Mayor of Bethlehem in 2005. On his election, he made this speech which, five years later, appears just as timely.

As the newly elected mayor of Bethlehem, I feel proud and privileged. Though it is little in size, it is one of the most famous cities on earth. Bethlehem is a name that lives in the hearts of millions of people. It signifies love, hope and peace for mankind.

Our history is full of inspirational stories but also of bad times. The bad times under the recent Israeli aggression have led to enormous pain and suffering for Bethlehem and to unprecedented deterioration in its situation.

Throughout the past years, the Israeli settlements’ greedy campaign has cost us considerable loss of our land and resources. The continuous closure imposed on Bethlehem has crippled our freedom to move about, our trade and our labor force. What aggravated the matter, however, is the construction of the separation wall that is slicing the northern borders of Bethlehem, tearing apart many of our families and isolating our holy town from the outside world. We are living in the horror of this apartheid wall that has grabbed our land and seriously affected all aspects of our life, including our ability to access basic services and work, thus our ability to sustain ourselves. Actually, we live today in what is similar to a big prison.

Such a massive obstruction, a concrete wall nearly 40 feet high, is closing the main and historic entrance of the town of the Nativity and has decimated tourism, our major source of income. Except for the last three months when a few pilgrims and tourists were seen again at the Church of the Nativity, tourism in Bethlehem has reached a stage of total standstill over the last four consecutive years. Unemployment in town has therefore soared to 55 percent. With a bleeding heart, I regret to say that more than half of Bethlehemites live today under the poverty line, which encouraged a serious wave of emigration among them, in particular Christians, the custodians of the holy manger.

With lack of adequate support from our Palestinian National Authority, the municipality lives at present in a dire financial crisis. Last month we could not afford to pay the salaries of our employees. The situation portends further deterioration should no immediate support be received, including the risk of cutting off essential municipal services rendered to our people, which would make things even worse.

Ladies and gentlemen, I am not telling a story nor am I trying to be gloomy. I am only conveying the truth that Bethlehem lives today. At this difficult time, we turn toward the sons of Bethlehem, toward our friends and partners throughout the world, asking them to reach out with a helping hand. To them we say Bethlehem, the cradle of Christianity, needs you more than ever before.

For sure one day the wall around Bethlehem will fall. Examples in old and recent history confirm this fact. We will strive to bring that day closer. But until then, we can refuse to live in its shadow. Bethlehem deserves to be open because it stands for the values of openness, an open democracy built on the open hearts of its citizens. The rich and unique heritage of Bethlehem reminds the world that we all face a poorer future without the hope and promise of our little town.

Ladies and gentlemen, despite our suffering and the oppression we are afflicted with, we hold deep faith in peace. We believe peace is the only solution. Peace is a blessing from God we all need. However, peace should be based on justice, equality and respect of others’ rights if it is to prevail, and not on oppression, might and separation.

I should say the Israeli occupation of our land is the sole obstacle to peace and the major cause of instability in our region.

Being on the soil of the U.S.A., the biggest democracy on earth, I call upon the U.S. government, the main sponsor of the Middle East peace process, to do its utmost toward implementing the international legitimacy represented in the United Nations Security Council resolutions, for the sake of a just, comprehensive peace in our region to allow both peoples, Israelis and Palestinians, to live in the Holy Land together and forever as good and equal neighbors.

May the star of the Nativity that shone onto Bethlehem more than 2,000 years ago and led the kings of the Orient to come and meet the Prince of Peace be a symbol of hospitality and guide all people of goodwill toward Bethlehem once again to restore its former glory as a place of dignity, a pilgrimage destination and an open city for peace.