Introduction to 1 Timothy from Stephen Sizer on Vimeo.

Thirty seven years ago next month I became a fresher at Sussex University. I was just settling into my new room when two American missionaries with Campus Crusade for Christ knocked on my door. Was I interested in doing a survey on religious opinions? I was. We met again a few weeks later and they led me to Christ, for which I will forever be grateful.

They recommended a good church where the Bible was taught and I began attending every Sunday. Another soul won for the Kingdom. Mission accomplished. Job done? No, not quite. In fact, definitely not. This is not what Jesus commanded his disciples to do in the Great Commission. Because this is not the way to reach the world for Christ. Jesus said,

“All authority in heaven and on earth has been given to me. Therefore go and make disciples of all nations, baptizing them in the name of the Father and of the Son and of the Holy Spirit, and teaching them to obey everything I have commanded you. And surely I am with you always, to the very end of the age.” (Matthew 28:18-20)

What did Jesus instruct his disciples to do? Make disciples.

What were they to do? “teach them everything Jesus taught them. Right? Wrong. That is not what Jesus told them to do. He said “Teaching them to obey everything I commanded you…” The Church is a body. It is not just a mouth. We need to put the hands and feet back on the body of Christ.

When Trent led me to Christ that was only the beginning of his responsibility for me. You see we are born to reproduce. After I became a Christian, we met weekly for Bible study and prayer. We went out witnessing together and I learnt how to share my faith from him. He discipled me. After a year, he weaned me off my dependency on him by leaving the country.

Before he left, he wrote in my Bible, “Several guys, mainly one, shared with me about the love of God found in Christ. It changed my life. I shared that message with you and it changed yours. Don’t let it stop with you, pass it on.”  I began to meet with one of his colleagues for Bible study and prayer and together we shared our faith, led students to Christ, took them through some basic Bible studies, showed them how to feed themselves, took them to a good church, took them out with us to share our faith, led other students to Christ, let them lead the basic Bible studies and they began reproducing themselves as well. Trent continued writing me letters from Easter Europe, like the one Paul wrote Timothy. He challenged me to work with him.

Over the years I made numerous trips behind the Iron Curtain to help Christians become disciple makers. In May this year I went back to Beilsko Bala, in Poland – the venue of my first trip in the mid 1970s. This time we were training church leaders to use the CE course.

There are two models of church growth. One that works and one that doesn’t. One that Jesus endorsed and one that many churches employ. The difference? It’s the difference between addition and multiplication. The difference between encouraging discipleship and encouraging dependency. Jesus said “make disciples” or “multiply disciples”. He did not say “add dependents” but that is what we do most of the time. The Church will never fulfil the Great Commission this way.

Why hasn’t it happened then? Partly because of isolation, distances involved, war and language barriers which still inhibit the proclamation of the gospel – but the greatest impediment is not linguistic, its not lack of technology or the fault of geography. It’s because the Church is largely content with addition instead of multiplication. Content with encouraging dependency rather than discipleship. That is why our mission statement is to know Jesus and make Jesus known, to win, build and send. And that is why we are going to study Paul’s these Sunday evenings in the Autumn.

The Recipient of 1 Timothy

The assumption in 1 Timothy, made explicit in Paul’s second letter is that they were in the disciple training business.

“And the things you have heard me say in the presence of many witnesses entrust to reliable men who will also be qualified to teach others.” (2 Timothy 2:2).

On the back of Time and Newsweek, there’s often an advert for Patek Philippe watches. The photograph shows a father playing with his son and the slogan says “You never actually own a Patek Philippe. You merely look after it for the next generation.” That is what Paul is saying about the gospel in 1 Timothy.

We know Timothy was taught the Scripture from early childhood by his mother Eunice and his grandmother Lois (2 Tim. 3:15). He was born of a Jewish mother and a pagan Greek father (Acts 16:1). He was saved during Paul’s ministry in Lystra during his first missionary journey (Acts 14:6-23). Timothy was probably a teenage boy at the time. He became Paul’s disciple, his friend and co-worker.

The words “my true son in the faith” (v2) denote his affinity or legitimate spiritual birth. By the time this letter is written Timothy has been Paul’s constant companion for fifteen years. He has frequently served as Paul’s trouble-shooter and as such was sent to Corinth (1 Cor. 4:17), to Thessalonica (1 Thess. 3:2), Philippi (Phil 2:19) and now Ephesus. He is probably in early to middle thirties by this point in his life. In many ways I think this letter resonates with us because we can identify with Timothy. First, he is not some kind of super-saint but a young man with real problems and yet used greatly by the Lord. Timothy considered himself inexperienced, insecure about the burdens and responsibilities being expected of him. Do you feel like that? I do.

If that is what is inhibiting you from active service for Christ  then this letter is for you, this series is for you.  Second, Timothy was also by disposition not an outgoing man but by temperament shy and needing affirmation. (2 Tim 1:7). Third, Timothy did not seem to enjoy great physical health.

He suffered from some kind of reoccurring problem with his stomach. (5:23). So this letter is intended as an encouragement, to motivate and challenge Timothy to remain faithful to his commission. In effect, this letter is Timothy’s charge from his teacher and mentor, the apostle Paul. The recipient of 1 Timothy.

The Purpose of 1 Timothy

“As I urged you when I went into Macedonia, stay there in Ephesus so that you may command certain men not to teach false doctrines any longer.” (1 Timothy 1:3).

“if I am delayed, you will know how people ought to conduct themselves in God’s household, which is the church of the living God, the pillar and foundation of the truth. (1 Timothy 3:15)

A primary focus of the letter concerns false teaching and its devastating effects. The letter as a whole is bracketed by discussion of the false teaching, and the positive instruction is crafted in direct contrast to the false teachers. The false teaching apparently involved speculation about the law (1:7–11) and asceticism (4:1–5). Paul’s real concern is with the results of the false teaching—for example, promoting speculations (1:4; 6:4), arrogance (6:4), and greed (6:5–10). Paul addresses the content of the false teaching only in passing but focuses on the fact that true Christianity is evidenced by lifestyles shaped by the gospel. Those whose lives are not shaped by the gospel show that they have turned away from the faith (1:6, 19–20; 4:1; 5:6, 8, 11–12, 15; 6:9–10). 1 Timothy is then a clear call for the church to live out in tangible ways the ethical implications of the gospel. The church is God’s primary vehicle for accomplishing His work on earth (see Matt. 16:18–20). The local church is the hope of the world.

The Key Themes of 1 Timothy

3. One key evidence of reception of the gospel is proper behaviour in corporate worship (evangelistic prayer, unity, modesty, and submission).2:1–15

5. Appropriate honour is a key element in how Christians should relate to one another in the church.5:1–6:2

These are the core themes we shall address in the following weeks. For now, here is an outline of 1 Timothy.

An Outline of 1 Timothy

This is where we are headed over the next few months these Sunday evenings. I invite you to read 1 Timothy with me on Sunday afternoons each week. If you want to read a commentary alongside your Bible, I recommend John Stott’s in the IVP Bible Speaks Today series. On Monday, December 29, 1913, an article appeared on page 6 of the Times newspaper.

Sir,–It has been an open secret for some time past that I have been desirous of leading another expedition to the South Polar regions.

I am glad now to be able to state that, through the generosity of a friend, I can announce that an expedition will start next year with the object of crossing the South Polar continent from sea to sea.

I have taken the liberty of calling the expedition “The Imperial Trans Antarctic Expedition,” because I feel that not only the people of these islands, but our kinsmen in all the lands under the Union Jack will be willing to assist towards the carrying out of the full programme of exploration to which my comrades and myself are pledged.

The story ran again a week later on January 5th, 1914 indicating that Shackleton was already swamped with applications. The often quoted advert which Shackleton allegedly wrote has never been corroborated. 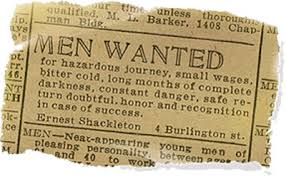 Unlike Paul’s letter to Timothy, this advert is most probably apocryphal. But it causes me to wonder what kind of ad Jesus would place today. “Men and women wanted for the task of helping to build my church. Even those working with you will often misunderstand you. You will face constant attack from an invisible enemy. You may not see the results of your labour, and your full reward will not come until all your work is completed. It may cost you your home, your family, your friends, even your life.” As we have begun to see, Timothy was willing to answer the ad. Have you? Will you?

Listen to the audio here