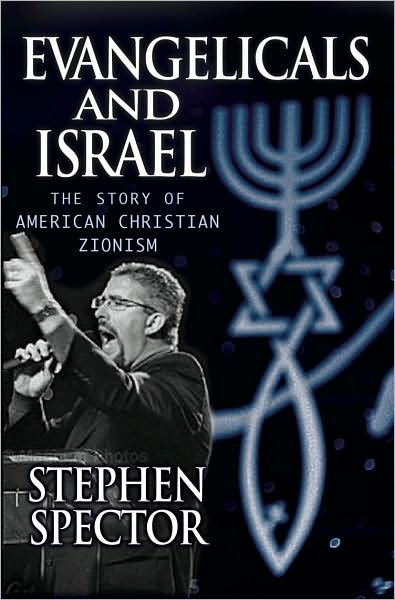 After decades of reluctance to address this deeply controversial issue, in recent years there has been a veritable avalanche of books critical of the Christian Zionist movement. Authors include Grace Halsell, Don Wagner, Timothy Weber, Victoria Clark, Dan Cohen-Sherbok, Naim Ateek, Gary Burge, as well as two books of my own. It is perhaps therefore not surprising to find a growing reaction among Jewish Zionists who have begun to come to the defence of their Christian allies.

Stephen Spector’s work is representative of this genre of Jewish apologists, which includes Paul Merkley, David Brog, Shalom Goldman and Gerhard Falk. Their agenda appears to be to justify a strand within Christian Zionism that is neither popular nor representative of evangelicalism as a whole, but which nevertheless plays a strategic role within the Israel Lobby.

The book purports to be the story of American evangelical Christian Zionism. It is a good read, as one should expect for a Professor of English. It would be more accurate, however, to describe it as the story of political Christian Zionism as represented by organisations such as Eagles Wings, Bridges for Peace, Christian Friends of Israel, Christians United for Israel and the International Christian Embassy. These self appointed para-church organisations have publically disavowed both proselytism among Jews as well as apocalypticism, based on a reductionist interpretation of the Bible. They are primarily lobby organisations, advocating on behalf of a Zionism among churches and in Washington among politicians.

So, although Spector interviewed over 70 Evangelical and Jewish Zionists in the course of his research, he relies on anecdotes and paraphrases to portray the views of those he deems ‘liberal’ or ‘modernist’ who regard biblical Zionism as an oxymoron. The chapter addressing criticisms of Christian Zionism is therefore one of the weakest and least convincing.

It is simply untrue to say that evangelicals who oppose Zionism “are closer to liberal mainline Protestants than to most conservative born-again Christians,” Academics at the bastions of evangelicalism in the USA, such as Fuller and Wheaton, repudiate Christian Zionism just as much as their counterparts in Europe. John Stott, the ‘father’ of evangelicalism, is not alone in describing ‘Christian Zionism’ as ‘biblical anathema’.

If evangelicalism is defined by the centrality of the gospel, the necessity of a personal faith in Jesus Christ, in the authority of the Scriptures and in the verbal proclamation of the gospel to all nations, it is actually Christian Zionists who, having reinterpreted the gospel and disavow proslytism, are closer in spirit to mainstream liberalism rather than conservative evangelicalism.

While Old Testament Bible verses are occasionally quoted without context to demonstrate that Zionism is biblically rooted, it is the evangelical critics of Christian Zionism, according to Spector, who ‘unfairly’ quote ‘the biblical prophets to attack the modern state of Israel’.

The fundamental question Christian Zionists avoid is whether the coming of Jesus Christ was the fulfilment or the postponement of the promises God made to Abraham? Which is central to the New Testament – Jesus or Israel? Ironically, Christian Zionists are portrayed as the new Zealots. Like their 1st Century forebears, they are trying to impose a Jewish kingdom by force, something Jesus repudiated. Spector cites, for example and without comment, Jack Hayford as promising, “if the Israelis need soldiers, he and his Pentecostal congregants will fight side by side with them.” Portraying the modern state of Israel as God’s chosen people on earth, the role of the Church is therefore reduce to providing dubious justification for Israel’s colonization of Palestine.

While ostensibly a book about evangelicals, it soon becomes rather tiresome when, in any debate or disagreement posed, it is always Zionists who are given the last word. So, for example, in a dismissal of Walt and Mearsheimer’s definitive work on the Israel Lobby, Spector defers to Alan Dershowitz suggesting the author’s claims “are variations on old anti-Semitic themes of the kind found in the notorious czarist forgery The Protocols of the Elders of Zion and in Nazi literature.”

Conversely, Spector gives ample space to some of the worst examples of Islamaphobia. There is a deep paranoia regarding the motives of Arabs in general and Palestinians in particular. He refuses to see that Israel could be, in any way responsible, partly or otherwise, for the perpetuation of the Middle East conflict. They are always, in his words, “the victims of injustice, not the perpetrators.”

Disappointingly, for a book with 82 pages of notes and indexes, there is no conclusion or summary chapter. It is as if the publisher has left it out by mistake or needed to reduce the word count. Whatever the reason, the book is weaker for it.

Instead, the last chapter is given to an assessment of the influences on George W Bush’s Middle East policy. Here Spector tries to downplay the impact of the Israel Lobby. Without really explaining why, he would have us believe there is “broad and deep support” for Israel in America because “that position is politically sound and morally just, not because of political pressure or influence” from evangelicals. Ironically, he gives the last sentence in the book to Hal Lindsey.

If first impressions count, the eulogy on the back cover from Abraham Foxman, National Director of the Anti-Defamation League, must surely be the kiss of death to any work claiming to be balanced or objective. One surprised Cambridge academic did ask me rhetorically, who on earth could have possibly vetted the book for Oxford University Press? One wonders. But then it is worth remembering that it was the Oxford University Press who published (and still publishes) the first Christian defence of Zionism, namely the Scofield Reference Bible.